Spectroscopy is the measurement and interpretation of electromagnetic radiation absorbed or emitted when the molecules or atoms or ions of a sample are transferred from one energy state to another energy state.

Ultraviolet spectroscopy is an absorption spectrum in which light in the ultraviolet region (200-400 nm) is absorbed by molecules, which causes electrons to be excited from the ground state to a high energy state.

Spectroscopy is basically related to the interaction of light and matter.

As light is absorbed by matter, the result is an increase in the energy content of atoms or molecules.

When absorbing ultraviolet radiation, this causes electrons to be excited from the ground state to the higher energy state.

The absorption of ultraviolet light by the compound will produce a unique spectrum that helps to identify the compound. 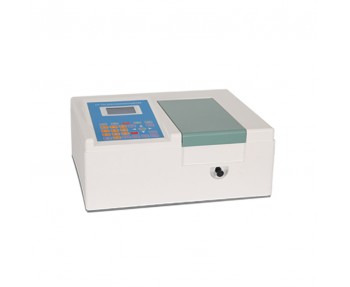 Tungsten filament lamps and hydrogen deuterium lamps are the most widely used and suitable light sources because they cover the entire ultraviolet range.

Tungsten filament lamps are rich in red radiation. More specifically, they emit radiation at 375 nm, and the intensity of the hydrogen deuterium lamp drops below 375 nm.

The monochromator is usually composed of a prism and a slit.

The radiation emitted from the main light source is scattered by means of a rotating prism.

Then, the various wavelengths of the light source separated by the prism are selected by the slit so that the rotation of the prism causes a series of continuously increasing wavelengths to pass through the slit for recording purposes.

The light beam selected by the slit is monochromatic and is further divided into two beams by means of another prism.

Both the sample solution and the reference solution are contained in the cell.

These batteries are made of silicon dioxide or quartz. Glass cannot be used for cells because it also absorbs light in the ultraviolet region.

Usually, two photocells are used for the detector in the ultraviolet spectrum.

The radiation intensity from the reference cell is stronger than the beam from the sample cell. This leads to pulsation or alternating current in the photocell.

The alternating current generated in the photocell is transmitted to the amplifier.

The amplifier is coupled to a small servo meter.

Generally, the intensity of the current generated in the photovoltaic cell is very low, and the main purpose of the amplifier is to amplify the signal many times in order to obtain a clear and recordable signal.

Most of the time the amplifier is coupled to a pen recorder connected to the computer.

The computer stores all the generated data and generates the spectra of the required compounds.

It is one of the best methods to determine impurities in organic molecules.

Due to impurities in the sample, other peaks can be observed and can be compared with standard raw materials.

By measuring the absorbance at a specific wavelength, impurities can be detected.

It can be used to clarify the structure of organic molecules, for example to detect the presence or absence of unsaturated bonds, and the presence of heteroatoms.

Ultraviolet absorption spectroscopy can characterize the types of compounds that absorb ultraviolet radiation, which can be used to qualitatively determine compounds. Identification is performed by comparing the absorption spectrum with the spectrum of a known compound.

This technique is used to detect the presence or absence of functional groups in compounds. Bands that lack a specific wavelength are considered evidence of a lack of specific groups.

Reaction kinetics can also be studied using UV spectroscopy. The ultraviolet radiation passes through the reaction cell, and the change in absorbance can be observed.

Many drugs are either in the form of raw materials or in the form of preparations. It can be detected by making a suitable drug solution in the drug and measuring the absorbance at a specific wavelength.

The molecular weight of the compounds can be measured spectrophotometrically by preparing suitable derivatives of these compounds.

UV spectrophotometer can be used as a detector for HPLC.