How to Use Electronic Balance?

Electronic Balance Manufacturer introduces how to use electronic balance.

1. Level adjustment: The blisters should be located in the center of the level gauge.

3. Turn the switch ON to make the display bright and display the weighing mode 0.0000g

Used to directly weigh the mass of a solid object. Such as a small beaker.

Requirements: The said object is clean, dry, not easy to deliquescence, sublimation, and non-corrosive.

Used for weighing samples of specified mass. Such as weighing a reference substance to prepare a standard solution of a certain concentration and volume.

Requirements: The sample does not absorb water, is stable in air, and has fine particles (powder).

Method: first weigh out the mass of the container and turn off the balance. Then add a weight with a fixed mass to the right pan, then slowly add the sample to the container containing the sample with a horn spoon, and weigh it with a half-open balance. When the difference between the added sample and the specified mass is less than 10mg, turn on the balance completely, and carefully extend the horn spoon containing the sample to about 2-3 cm above the container of the left weighing pan, with the other end of the spoon resting on the palm , Hold the horn spoon firmly with your thumb, middle finger and palm, and flick the handle of the spoon with your index finger. Slowly shake the sample into the container until the balance is balanced. This operation must be very careful.

Used for weighing samples of a certain mass range. It is suitable for weighing many parts that are easy to absorb water, easy to oxidize or easy to react with CO2.

â‘ Clamp the dried weighing bottle with a small paper strip, and roughly weigh its mass on a platform scale

â‘¡Put a little more than the required amount of sample into the weighing bottle with a horn spoon, and roughly weigh it on a platform scale.

â‘¢Put the weighing bottle in the center of the left pan of the balance, add an appropriate weight or ring code on the right pan to balance it, weigh out the accurate mass of the weighing flask and sample (accurate to 0.1 mg), and record the reading , Set to m1g. Turn off the balance, and subtract the minimum weight to be weighed from the right weight or ring weight. Take the weighing bottle from the top of the receiver, clamp the handle of the bottle cap with a piece of paper in your right hand, and open the cap. Slowly incline the bottle body and tap the mouth of the bottle gently with the cap to make the sample slowly fall into the container (do not sprinkle the sample outside the container). When it is estimated that the poured sample is close to the required mass (estimated from the volume), slowly erect the weighing bottle, and tap the mouth of the bottle lightly with the cap to make the sample sticking to the upper part of the bottle fall Put the bottle into the bottle, close the cap, put the weighing bottle back on the left pan of the balance and weigh. If the left side is heavy, you need to strike again, if the left side is light, you cannot strike again. Weigh its mass accurately and set the mass at this time as m2g. The mass poured into the receiver is (m1-m2)g. Repeat the above operation to weigh multiple samples. 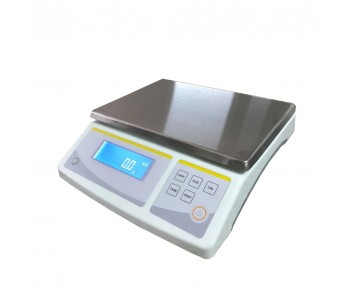 Maintenance and maintenance of electronic balance

â‘  Place the balance on a stable workbench to avoid vibration, airflow and sunlight.

â‘¡ Adjust the bubble of the spirit level to the middle position before use.

â‘¢ The lab electronic balance should be preheated according to the instructions.

â‘£ When weighing volatile and corrosive items, they should be placed in a closed container to avoid corrosion and damage to the electronic balance.

â‘¤ Perform self-calibration or regular external calibration of the electronic balance to ensure that it is in the best condition.

â‘¥ If the electronic balance fails, it should be checked and repaired in time, and it is not allowed to work with "illness".

â‘¦ The operating balance should not be overloaded to avoid damage to the balance.

â‘§ If the electronic balance is not used for a long time, it should be stored temporarily.